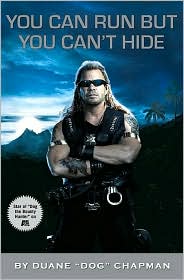 Dog the Bounty Hunter! That’s right! Whilst drowning my sorrows in the Social Sciences section of my local bookstore, my eyes caught sight off the Dog. All I could think to myself was, ‘I have GOT to read this.’

Most people know Duane Chapman as the guy on TV, the one who chases after fugitives. I’ve been an avid watcher of the show myself for quite some time. However, there is much more too him than most people think, and certainly more than one might believe after just a quick glance at him. I was familiar, to an extent, with the fact that he had a rough past, but I must admit here and now that I really did not have any idea just how difficult things have been for him.

You Can Run But You Can’t Hide is an unforgiving account of Dog’s life. Everything from his childhood, school bullies, his parents, his faith, gangs, drugs, women, his children, being convicted of a murder he didn’t commit and subsequent jail time, and of course what he is probably most well known for, his involvement in the apprehension of Andrew Luster, nothing gets left out in this memoir.

I could not imagine having to experience some of what he has. Not the death of one child, but two. Living with the fact that his children had been taken away from him by ex-wives who seemed not to care about how it affected him. He spent many of his childhood years being physically abused by his father, not understanding why, not until he was an adult. He was convicted for murder, even though he had no idea it was going to happen and wasn’t even in the house when it did. He was again put in jail in Mexico, for supposedly kidnapping Andrew Luster who was a convicted rapist running from the law. He’s been piss poor and fought a mean drug addiction, one that near caused him his life. Life hasn’t always been nice to him.

I know that it is no secret that Dog and his family go about bounty hunting in a much different way than others, and that others in the business have it out for him. What I did not know is how far others have gone to screw him over. He really has been through hell and high water (some his own doings, some completely out of his hands), yet he still prevails.

Regardless of what anyone else says to me or thinks, I have a new found respect for Duane “Dog” Chapman, and I have a new set of eyes to look at him with. I truly enjoyed reading his first book.