Things have been rough lately and I’ve been spending much of my time finding ways to keep my mind busy. Basically, I’ve been working like crazy during the day and spending my nights tucked away into a book until I exhaust myself. The rest of the time I’m dealing with not fun family stuff. A friend finally forced me to consider doing something fun and for myself. So I spent most of today in Niantic at my favorite used book store. As per usually I came home with a couple piles worth of books.

The Eight by Katherine Neville
Flaubert in Egypt edited by Francis Steegmuller
You Suck by Christopher Moore – In fact, I’ve heard lots of great things about Christopher Moore but never read any of his work. This is the sole Moore book I found today, so I figured I’d give it a go.
The Rotters’ Club by Jonathan Coe – I actually picked up this book entirely because of the cover. I still don’t even know what it’s about. I’m hoping to enjoy the surprise.
Interred with Their Bones by Jennifer Lee Carrell
The Electric Church by Jeff Somers – This will be another wait and see book. I originally noticed the little publisher icon, and when I picked it up and saw the cover it went directly into the bag. 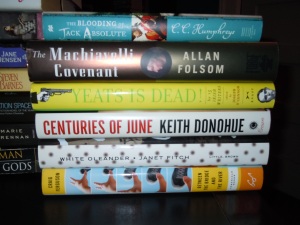 The Blooding of Jack Absolute by C.C. Humphrey’s – It was the title that caught me on this one.
The Machiavelli Covenant by Allan Folsom
Yeats is Dead! A Mystery by 15 Irish Authors – which I simply couldn’t leave without
Centuries of June by Keith Donohue – This book was added to my TBR List after I received an email about it, so I was quite pleased when I came across it today it went directly into the bag.
White Oleander by Janet Fitch
Between the Bridge and the River by Craig Ferguson – How do you say no to Craig Ferguson? You don’t.

Left pile: The Rising Tide by Jeff Shaara, The Phantom of the Opera by Gaston Leroux (which I’ve been saying, ‘I’ll read this, I’ll read this’ and now that I own it I can!), Blood Ties by Kay Hooper, Midnight Rain by Holly Lisle, No Good Deeds by Laura Lippman, Murder on the Orient Express by Agatha Christie, A Rich Full Death by Michael Dibdin, To The Power of Three by Laura Lippman, Shock Lines by Warren Newton Beath (Zebra Horror!), City of Night: Frankenstein, Book 2 by Dean Koontz (which I’ve been trying to find for six months!)

Right pile: Omega by Jack McDevitt (Every. Single. Time. I go to the book store I walk by this guys books. It’s high time I stop walking by them and buy one to read), Good Omens by Neil Gaiman & Terry Pratchett (After finishing my first Neil Gaiman book recently I decided I needed more of his books), Daughters of the Forest by Juliet Marillier, Gabriel Knight: Sins of the Father by Jane Jensen (which is supposedly based on a video game…), Lion’s Blood by Steven Barnes (A book that was recommended to me a while back), Revelation Space by Alastair Reynolds, Warrior by Marie Brennan, American Gods by Neil Gaiman

All in all, I have to say I made away with some great books today. Now for finding a place to put all of these new books… and the ones that I haven’t found a home for before buying all of these.

With that, I’ll be curling up in bed with the pupster and a good book.

Any good book swag of your own lately?