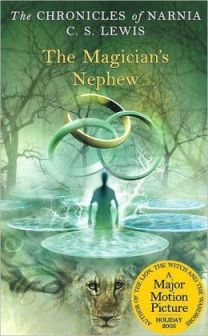 When Digory meets Polly in London the last thing he expects is that they’re going to be thrown into the adventure of a lifetime, but thanks to his scheming uncle and the curiosity of kids, what was looking to be a dreadful summer turns into a journey the two never saw coming. They encounter the Wood Between the Worlds, an evil empress accidentally awakened, there’s havoc in London, and not to mention they find the newly created Narnia. All in all, it’s bunches of excitement packed into a short period of time.

I’ll admit it again… this is going to be my first full read of all of the Narnia books. I’ve seen the movies and did read The Lion, the Witch, and the Wardrobe when I was younger, but the full series? Nope. I’m not sure what I was expecting when I jumped into this read, but I think I was expecting something more like the idea of Narnia that I had in my head. While The Magician’s Nephew wasn’t that, in the end I wasn’t disappointed.

The Magician’s Nephew is a really great opening to the Chronicles of Narnia. The characters were great. It was so easy to love or hate them, which in my mind is important when I’m reading. We also learn about the founding of Narnia. On that note, can I just say… I knew that Aslan was ‘The Dude’ of Narnia, but I didn’t realize that he was more like God Dude than King Dude (though knowing what I know about Lewis it makes sense in hindsight). Reading this book really does answer a lot of questions that one has about the world of Narnia and for that I was glad.

I do have one thing that I wasn’t crazy about when reading this though. The way the story is narrated was difficult for me. After a while I started to adjust, but it was still weird. In the end it didn’t take away from the story.

Overall, The Magician’s Nephew was a fun, quick, and easy read. I look forward to completing the series and finally knowing everything that’s going on in Narnia.

The Chronicles of Narnia series:

3 thoughts on “The Magician’s Nephew by C.S. Lewis”