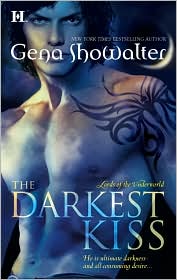 The Darkest Kiss is the second installment of the Lords of the Underworld series. We are back with the Lucien and his demon, Death. Lucien’s demon basically requires that he transport souls either to heaven or hell. He is also the self-appointed leader of the Lords. When they were all first cursed he was the first to step up and take control. He’s the level headed go to guy.

Anya, who we met briefly in The Darkest Night, is the goddess of anarchy. She’s been known to start wars in the past, but now prevents such destructive behavior by helping herself to a steady dose of shoplifting. Anya holds a curse of her own and as such has not been able to give too much of herself, but now she’s set her sights on Lucien, and of course everything’s about to change.

Lucien struggles to understand why Anya keeps coming after him. He is, after all, the most unattractive man of his group, covered in scars from self-inflicted wounds. Anya struggles with the limitations of her curse. And what’s happening while they get their struggle on? The search for Pandora’s box continues, with Anya’s help, while also fending off Cronus (the new king of gods) who wants something from Anya and is willing to go to any length to get it.

I loved it. I have to admit that Anya’s craziness was a breath of fresh air. She’s strong and independent, sure of herself, sarcastic, and nobody – not even some immortal warrior – is going to get in her way. Lucien on the other hand is one of those brooding hero types. My favorite (insert happy face of choice here). The two of them really are perfect together.

With action and love, new characters, it’s all quite fun. I really love how the story is unfolding

I also really like that I’m getting to know Paris a bit better, but I’m really waiting to see what happens when his book comes along. And by that I mean I’m pacing with some scary impatience and if I have to wait until the very last book, well, I might cry.

Basically, the book was great. I’m getting really attached to the characters and can’t wait to see what happens next!

One thought on “The Darkest Kiss”